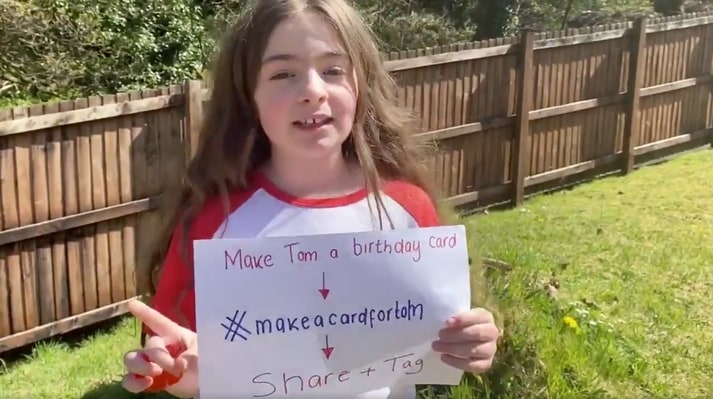 Anyone who reaches the grand old age of 100 deserves to receive lots of birthday cards, but none are more deserving than Captain Tom Moore, who on April 16, a fortnight before reaching his own special birthday milestone, had raised an astonishing £17 million with the amount still going up by the minute for the NHS.

Now, a campaign, the brainchild of eight-year old Welsh schoolgirl Reegan Davies, for everyone to send this hero a card in time for his birthday on April 30 is garnering widespread support from children and adults alike.

The nation (and indeed the world) has been gripped by the progress of war veteran Captain Tom who  originally set his sights on raising £1,000 for NHS Charities Together by completing 100 laps of his garden before his 100th birthday. At noon on April 16 he made his 100th 25 metre lap with his walking frame round the garden of the home he shares with his family in Marston Moretaine, but smashed his target out of the water, with his JustGiving fundraising page at that point topping £13 million, made up of donations from more than 650,000 people. And the money is still flooding in, and Tom is still carrying on walking.

They may be an over 91-year age difference between Captain Tom Moore and Reegan Davies, but the plucky youngster shares the same determination in her mission for Tom. As soon as she heard about Tom’s valiant fundraising challenge she knew she wanted to something for him – and what better than ensure he would have a birthday awash with greeting cards and so launched a #makeacardfortom campaign.

“He is a war hero and now he’s my hero too,” said Reegan in a video hosted on a Twitter account hosted by her mum, echoing the sentiments shared by millions of others who have been inspired by Tom’s self-imposed challenge and his good grace.

Reegan is now urging everyone to join the #makeacardfortom campaign so that imagery of all the cards people make can be collated into a video and then shared with Tom and his family.

1. Make a birthday card at home for Tom with pen and paper

3. Use the hashtag #makeacardfortom so all the birthday cards can be collated together.

Anyone however wishing to send a real birthday card can do so by sending them to Captain Tom Moore, c/o Post Office Limited, 67 Bedford Road, Marston Moretaine, MK43 0LA, Bedfordshire, England.