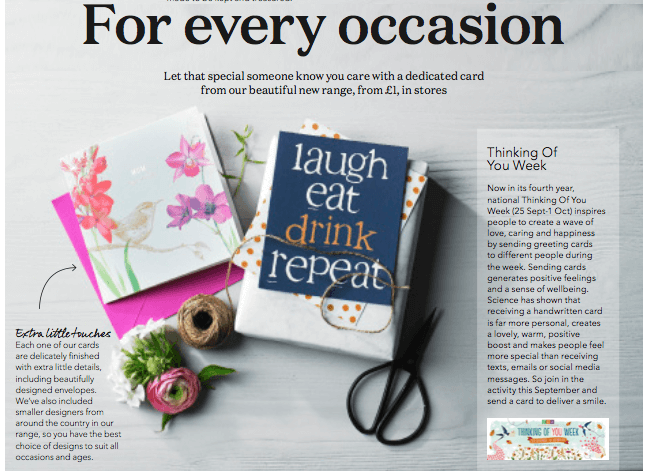 Waitrose, Clintons and Card Factory Back Thinking of You Week

Waitrose, Clintons and Card Factory are among the multiple retailers to really be getting behind ToYW.

For Waitrose this is a great fit as Thinking of You Week is perfectly timed to coincide with its brand new greeting card selection going into all the supermarket’s stores. 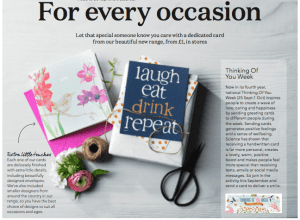 “We have a full-page editorial in our Waitrose Weekend magazine, which has the same circulation as the Daily Telegraph, for the second week in September edition. As well as featuring our new greeting card selection it will also include details all about Thinking of You Week,” confirmed Kirsty Hicks, greeting card, wrap and stationery buyer of Waitrose.

Clintons the specialist multiple, will be installing till point Thinking of You Week displays throughout all its stores, plans to highlight the event in its shop windows as well as raising awareness in social media and through its other PR channels.

“Our stores’ staff will be briefed with details of Thinking of You Week so they can engage with customers instore to reinforce the event,” Tim 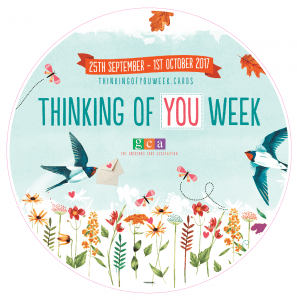 A ToYW decal, one of the many PoS items which will be on display in Clintons branches.

Fairs, VP of marketing and ecommerce at Clintons.

ToYW, which is based on sending extra cards to people to show you care, echoes the essence of the retailer’s current PR drive, “which promotes ‘The Greeting Card’ as the most powerful communication medium bar none. Our message is that nothing beats a handwritten card, especially when it’s least expected to brighten anyone’s day. A text/post doesn’t come close!”

Card Factory emailed its customers with a fun animated pug and the message “Put a smile on a special someone’s face with a card to let them know how loved they are. Thinking of You W 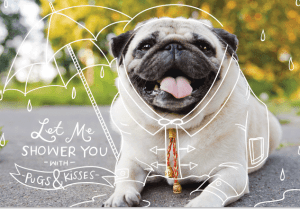 eek starts on the 25th September and is all about inspiring people to send cards to those they care about. So order your cards today to send to your favourite people!”

“It is really great that multiples, such as Clintons, Waitrose and Card Factory, have embraced Thinking of You Week.” commented Sharon Little, ceo of the GCA who has spearheaded ToYW since its inception four years ago. “This special Week provides a wonderful opportunity for greeting cards to really demonstrate their emotional power, to bring joy, happiness and support. Each year our wave of happiness gets bigger with more retailers, publishers and suppliers involved as well as more schools, community groups and charities.”

An earlier version of this article appeared in PGBuzz.net

← Science shows greeting cards are good for you!
All Posts
More Lovely Thinking of You Week Initiatives →