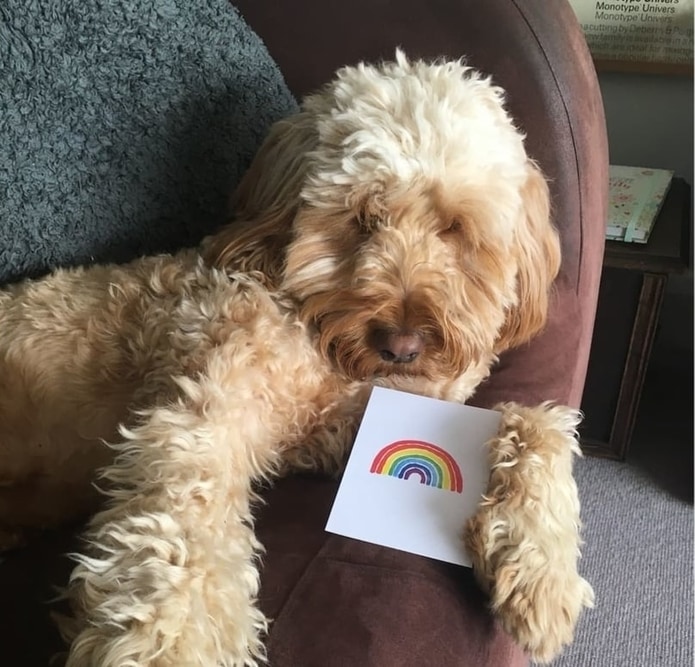 Heidi and Dominic Early, co-owners of Earlybird Designs, a card publishing and retail business have launched #connectwithcards campaign, which kicked off with the Early family delivering free cards (ready stamped) to all the residents in the two neighbouring streets of their home in Canterbury, Kent.

“We wanted to do something positive for our neighbourhood and get our children doing something that they would remember as having had a positive impact,” explains Heidi Early, who, as well as running the Earlybird Designs card publishing business with her husband Dominic, also owns and runs a specialist card and gift shop of the same name in Stoke Newington, London.

The first stage of the campaign saw Heidi and Dominic’s 13 year old son Oliver package up 72 of the publisher’s mini rainbow cards, put a stamp on each envelope and then their 11 year old daughter Amelia hand delivered them with a note to all the neighbours.
“The note explained that this was a card for them to send to someone they wanted to connect with during lockdown offering that we could take it to the post box too if that was an issue,” explains Heidi. The response to this selfless activity has been overwhelming.

“Wow, I am soooo pleased we did it,” adds Heidi. “I have had so many text message and phone calls thanking us, from people I’ve never even met. People have been really keen to tell us who they are sending the card to: the local hospital, grandparents, a friend in Uruguay, another going to Belgium, a grandson, a friend looking after someone. Two people now have popped a postcard in our door thanking us for such a kind gesture, and we have also received some mini eggs for the children. It has completely warmed my heart and connected us with so many local people.”

As she points out: “It proves once again how important cards are to us and our mental wellbeing.”

Earlybird Designs started in 1998, with Dominic selling his own handmade collage cards on a market stall. By 2003, the couple, who then lived in London, had opened the shop to sell the Earlybird Designs products as well as those from other small companies. Recognising the potential to grow as a card publisher, rather than solely rely on Dominic’s creative talents, Earlybird started publishing work of several talented artists and how the company has stockists all over the UK and overseas.