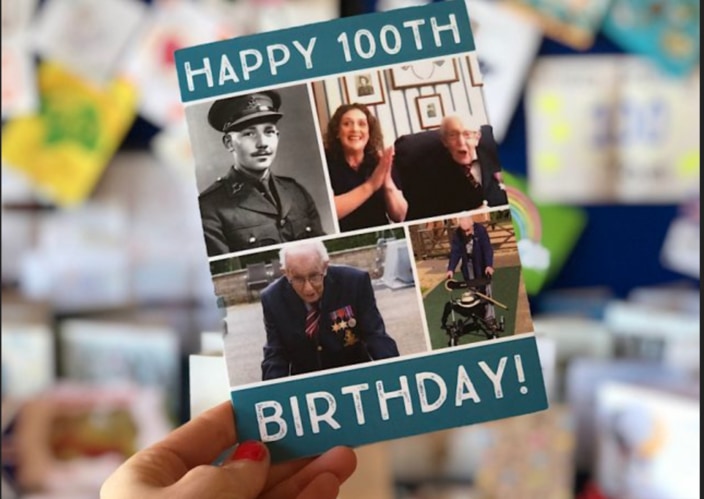 Over 100,000 Birthday Cards Sent To Captain Tom Moore For His 100th Birthday

If ever proof was needed as to how close greeting cards are to the nation’s heart as the best way to communicate your affection and regard for your fellow man it is there in all its glory in the main assembly hall of Bedford School – where over 100,000 100th birthday cards have already arrived in readiness for the centenary of Captain Tom Moore on April 30.

Having warmed the nation’s soul with his inspiring fundraising (raising more than £28 million to date by completing laps of his garden before his 100th birthday), the general public clearly wanted to do more than just donate to the cause – resulting in the little post office in the Bedfordshire town of Marston Moretaine being bombarded with sacks full of cards, the likes of which it has never seen before.

Bedford School, of which Captain Tom’s grandson Benjie is a pupil, has stepped in re-purposing its main assembly hall to enable the cards to not only be received from the Post Office (the post sacks being transported in two minibuses a day), but also, thanks to the support of 60 volunteers, the cards are opened and put on display.

Bedford School has made a video to show this wonderful greeting card extravaganza, which (click here to view)

The news has not gone unnoticed by many of the UK newspapers and TV news channels, keen to cover this feelgood story.

Captain Tom’s 16-year-old grandson (and Bedford School student) Benjie Ingram-Moore, who has been heavily involved in the card opening, appeared on BBC News acknowledging the sentiments written in the cards.

“I think a lot of the cards are so heartfelt and it really shows the effort that people have put in, I think he will really appreciate that,” said Benjie. “I am going to try and take a picture of as many as I can and show them to him, as he will happily sit through and read them all.”

Bedford School headmaster James Hodgson was quoted in the Metro as saying: ‘It’s a wonderful story at a time where frankly everybody needed it. ‘It’s also a real reaffirmation of people’s kindness and I’m a great believer that people are fundamentally kind and this is just the most wonderful way to show it.’

Scribbler, which has been giving away free cards for NHS and key workers from its website, has expanded that to include the option to send Tom a free birthday card for reaching the milestone age of 100! All anyone needs to do is include your birthday wishes inside using the site’s personalise function, add the card to your Scribbler basket and use the code THANKYOUNHS which will completely remove the cost of the card and P&P.

Also keen to honour of Captain Tom Moore’s outstanding effort of raising money for our NHS heroes ahead of his 100th birthday celebration, online greeting card company thortful.com  is donating 100% of the profits for every 100th milestone birthday card sold up until Tom’s birthday on 30 April.

Greeting card publishers have been keen to create their own special cards to send to this modern day hero in good time for his special milestone.

Inspired by Captain Tom’s incredible and heart-warming story, Rebecca Green, owner and creative of Kings Lynn-based Raspberry Blossom has created a special card that is being sold to raise further funds for NHS Charities Together, with profits from the sale of the card being donated to the cause. The design centres around the memorable words Captain Tom said in a BBC interview just after he completed his 100th lap of his garden. Tom was asked what advice he had for people who might be anxious as a result of Covid-19. His poignant and uplifting words were “The sun will shine again and the clouds will go away”.
Rebecca designed the card and working with Adam Short at Tonbridge-based digital greeting card printer, The Imaging Centre, they were on sale within a matter of days, with The Imaging Centre forgoing the production costs for the cards. The card can be bought directly from raspberryblossom.com where you can also have a handwritten personal message included and sent directly to the recipient for free. Additionally, the design can also be purchased from Imaging Centre’s ICS direct to consumer platform.